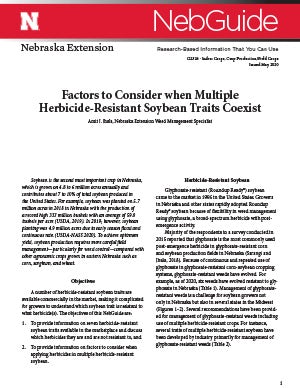 Soybean is the second most important crop in Nebraska, which is grown on 4.8 to 6 million acres annually and contributes about 7 to 10% of total soybean produced in the United States. For example, soybean was planted on 5.7 million acres in 2018 in Nebraska with the production of a record high 333 million bushels with an average of 59.0 bushels per acre (USDA, 2019). In 2019; however, soybean planting was 4.9 million acres due to early season flood and continuous rain (USDA-NASS 2020). To achieve optimum yield, soybean production requires more careful field management—particularly for weed control—compared with other agronomic crops grown in eastern Nebraska such as corn, sorghum, and wheat.